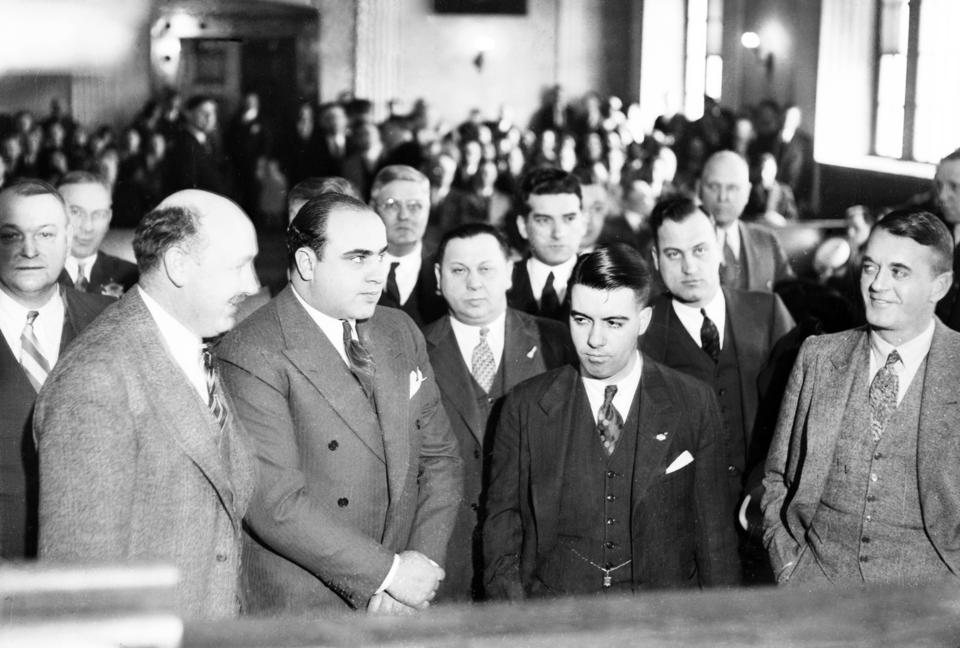 On this day in 1931, Al Capone was found guilty of tax evasion. The gangster who had reportedly boasted, “They can’t collect legal taxes from illegal money” was sentenced to 11 years in prison for failing to file tax returns.

Alphonse Gabriel Capone was born in Brooklyn, New York, in 1899, to Italian immigrants. His parents, Gabriele Capone and Teresa Raiola, found working-class jobs and settled into their new lives. Capone, however, had trouble fitting in and was expelled from school at age 14 for hitting a teacher.

After he left school, Capone tried his hand at odd jobs, but nothing stuck. Capone eventually turned to a friend, Johnny “The Fox” Torrio, who was just getting started building an empire. Torrio would go on to be called “the father of American gangsterdom” by Elmer Irey, the first chief of the Internal Revenue Service (IRS) Enforcement Branch, now referred to as the IRS Criminal Investigation Division (you can find out more about IRS-CI in my podcast interview with former IRS-CI Chief Fort here).

Torrio introduced Capone to Frankie Yale—and his first real taste of the underworld. Yale owned a number of clubs where patrons could go to drink, gamble and pay for sex, and gave Capone a job as a bouncer and bartender. While at work, Capone, who wasn’t known for being even-tempered got into a fight. During the melee, he was slashed across his left cheek three times with a knife, leaving a permanent scar and earning the nickname “Scarface.” Supposedly, the fight was over a girl.

At age 18, Capone met and married Mae Coughlin. Soon after, the couple had their first child, Albert Francis “Sonny” Capone. Sonny’s birth gave Capone pause—briefly—to consider making an honest living. The family moved to Baltimore where Capone intended to become a bookkeeper – working the numbers on the right side of the law.

An Offer He Couldn’t Refuse

The dark side quickly caught up to Torrio. In 1925 he barely survived an assassination attempt by rival mobsters Hymie “The Pole” Weiss, Vincent “The Schemer” Drucci and George “Bugs” Moran. After spending three weeks in the hospital, and even more time in prison, Torrio wanted out. He decided to leave Chicago, handing over control of his empire to Capone.

As Capone’s empire grew, so did his penchant for violence. The bodies piled up in Chicago, and most had Capone’s fingerprints all over them. The feds, however, couldn’t make charges of violence stick against Capone. But something happened in 1927—miles away from Chicago—that would prove to be a turning point. On May 16, 1927, the U.S. Supreme Court ruled in U.S. v. Sullivan that “[g]ains from illicit traffic in liquor are subject to the income tax would be taxable” (274 U.S. 259). It was just the ruling the feds needed.

(Fun footnote: The Justices noted in Sullivan that “It is urged that if a return were made the defendant would be entitled to deduct illegal expenses such as bribery. This by no means follows but it will be time enough to consider the question when a taxpayer has the temerity to raise it.”)

In 1928, finally fed up, the Secretary of the Treasury summoned Irey and told him to simply “get Capone.”

Irey is said to have replied, on behalf the IRS-CI, “We’ll get right on it.”

Even as Irey was investigating Capone, the violence continued. The lawlessness culminated on February 14, 1929. Capone was in Miami at the time of the shootings but was immediately blamed for what came to be known as the St. Valentine’s Day Massacre.

On the day of the murders, witnesses saw four men enter the garage: two of the men were dressed as police officers. The “officers” ordered Moran’s gang to line up against the wall where they were hit with a spray of machine-gun and shotgun bullets: 70 rounds of ammo were fired. All seven men inside died – most of them immediately.

One of the victims, Frank Gusenberg, survived long enough to allegedly tell police, “No one shot me.”

Moran escaped the violence, but just barely: He was late to the scene and missed the shootings by minutes. A few days later, he allegedly told reporters, “Only Capone kills like that.” It was a line so famous that it made it into the movies.

Capone allegedly reponded, “The only man who kills like that is Bugs Moran.”

There were no witnesses who lived to tell the tale, there was no evidence, and no one was ever prosecuted. However, the feds believed that Capone was responsible, and in 1930, Capone was dubbed “Public Enemy Number One,” a label he reportedly hated (his older brother, Ralph “Bottles” Capone would earn the title “Public Enemy Number Three”).

Capone grew more bold, believing that he was untouchable. He failed to answer a subpoena to appear before a federal grand jury, claiming he had bronchial pneumonia and was confined to bed rest.

He was arrested on contempt charges after prosecutors produced evidence that he had been gambling at the track and cruising in the Bahamas. He was released on bond but was re-arrested on concealed weapons charges and sentenced to prison at Philadelphia’s Eastern State Penitentiary, where he reportedly lived in luxury amid French furniture, plush rugs and a Victrola radio in his cell.

During this time, the feds were quietly building a case against Capone. Despite his public and extravagant lifestyle, Capone never filed a federal income tax return, claiming that he had no taxable income. IRS Special Agent Frank Wilson and the “T-Men” followed the money, gathering evidence that Capone had made millions of dollars on income that was never taxed. It paid off: Capone was indicted on 22 counts of federal income tax evasion.

He wasn’t alone: his brother, Ralph, Jake “Greasy Thumb” Guzik, Frank Nitti and others were also charged. Capone bragged that he had reached a plea agreement that would have sent him to jail for just two years. The judge refused to accept the deal, and the case went to trial.

He immediately appealed and was denied a rehearing.

Prison: From Atlanta To Alcatraz

Capone’s first prison stop after his conviction was Atlanta. Initially, Capone bribed prison officials to get what he wanted, just as he had done in Philadelphia. When he was found out, he was punished by being relocated to Alcatraz. Alcatraz proved to be Capone’s undoing.

The warden, James Aloysius Johnston, wasn’t as easily swayed as those Capone had previously encountered. When Johnston asked Capone his name, the mobster allegedly responded, “You know who I am.” Johnston is said to have retorted, “Here you are now known as AZ-85.” Capone eventually admitted, “It looks like Alcatraz has got me licked.”

Capone spent more than four years at Alcatraz, where he worked doing jobs like laundry (as most grade school kids know thanks to Gennifer Choldenko). During his sentence, his health eventually got the best of him: He had contracted syphilis years before, and it worsened, leading to “intermittent mental disturbances.”

In 1937, he again appealed his sentence, this time to District Court, arguing that his verdict had been inconsistent. The appeal was dismissed.

Capone moved again in 1939, this time to a mental hospital, to serve out the remainder of his sentence before retiring to Florida. Before his death, his physician determined that he had deteriorated to the point where he had the mental capacity of a 12-year-old. Capone, once the most feared man in America, died on January 25, 1947, at the age of 48.

Today, Capone’s story lives on in the movies – and in museums. You can find an actual section of wall from the St. Valentines Day massacre now on display in the Mob Museum in Las Vegas, NV.

Geoff Schumacher, the Vice President of the exhibits and programs at The Mob Museum, spoke with me about how the museum obtained the wall and other memorabilia related to Capone, IRS-CI, and organized crime in the latest episode of the Taxgirl podcast.