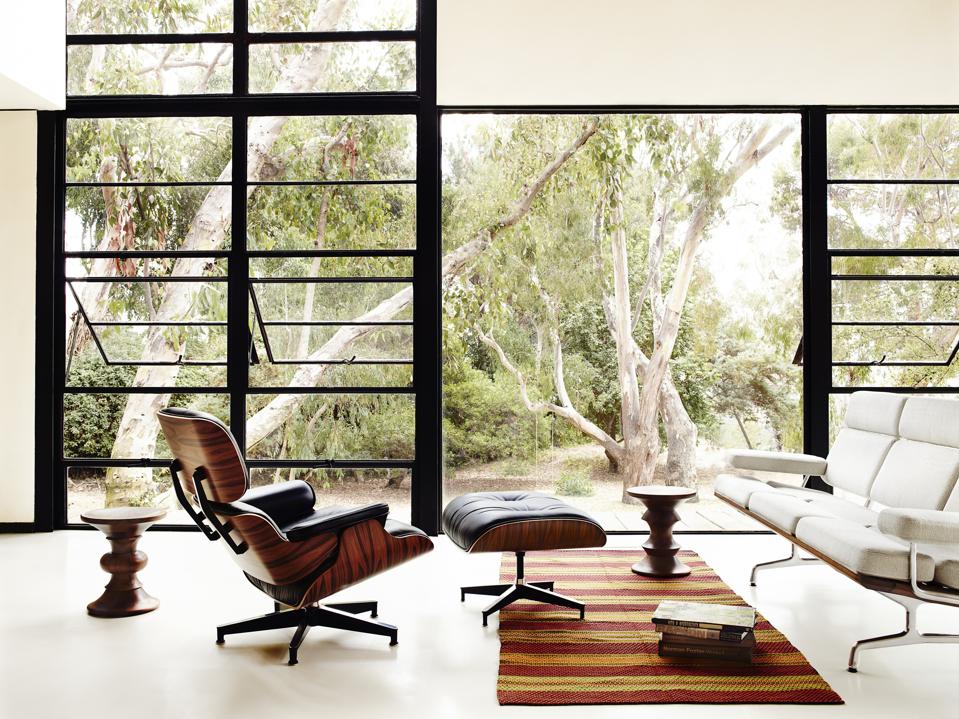 Charles and Ray Eames produced the Eames Lounge Chair and Ottoman in 1956, when the couple was in the first flush of their success.

During World War II, they had designed and made a leg splint to help transport wounded soldiers. The Eameses created their splints from wood veneers, which they bonded together with a resin glue and shaped into compound curves, using a process involving heat and pressure. The molded wooden splints were a vast improvement over problematic metal traction splints, which were apt to induce gangrene because they impaired blood circulation.

The US Navy’s funding for the splints allowed Charles and Ray to experiment with furniture designs and mass production. A direct result was their iconic lounge chair and ottoman. 64 years later, the molded plywood pieces upholstered in leather have never gone out of production. Now as then, it is a chic “must-have” for homes and offices alike and, with today’s resurgence of mid-century modern styles, it is more in demand than ever.

From the beginning, Charles and Ray Eames’ furniture-making partner was Herman Miller, located in western Michigan. (The couple met while both were students at Michigan’s Cranbrook Academy of Art.)

“Our company has evolved through the years, but Eames molded plywood furniture has been in continuous production,” says Amy Auscherman, corporate archivist for Herman Miller. “The Eames Lounge Chair and Ottoman has always been a best-seller.”

Nelson’s own Bubble Lamps are among Herman Miller’s perennial best sellers. But now that appreciation for mid-century modern styles is at an all time high, some of his 1950s furniture designs are being reintroduced by the company, including his Thin-Edge Bed and his Daybed. The minimal lines of those pieces make them eminently suited to small city apartments.

“These are light and airy designs,” Auscherman says. “They are not like a giant four-poster bed that sucks all the air out of a room.”

For an example of a more recent example of Herman Miller furniture that has become timeless, she points to the Aeron Chair, an office chair designed by Don Chadwick and Bill Stumpf.

“The breathable woven fabric is for people who sit a lot,” says Auscherman. “Introduced in 1994, it has become the standard office chair.”

The company hopes that, one day, these pieces are considered classics in the way that Charles and Ray Eames’ furniture are.

Top Wall Street analysts are betting on these stocks heading into December
S&P 500 closes at another record Friday, gains 2% on week
Fauci says Christmas and New Year’s restrictions will be necessary due to holiday coronavirus wave
Majority of seniors have been targeted by a Social Security scam in the past three months. Here’s how to protect yourself
3 Reasons Why You Should Or Should Not Rollover Your 401(k)